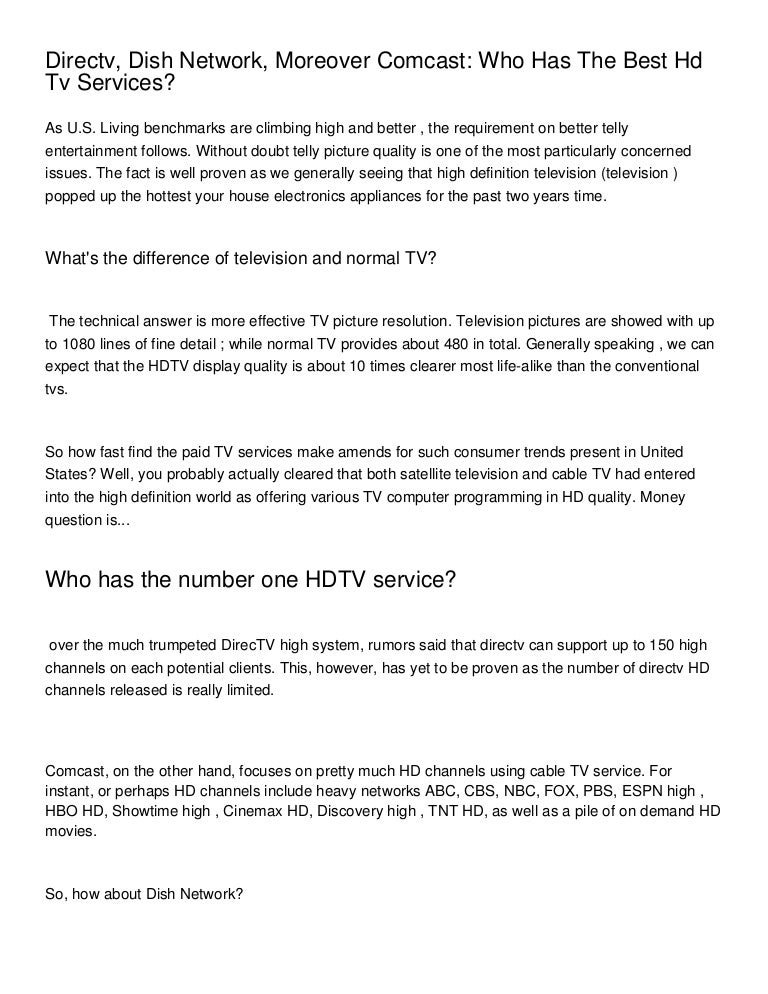 I had a satellite dish installed in my home for the first time five years ago and I haven't looked back since. Before we set up an account with Dish Network, good old fashioned rabbit ears were the only sort of tuning device we had; yes we did use metal coat hangers and aluminum foil once in a while to get a clearer picture. My family had taken turns balancing the coat hangers and foil, standing on one foot and holding their noses to their knees for nearly three years and we finally felt it was time to reward ourselves with real TV. So we decided to go with Dish Network Satellite service.

At first our real big worry was the signal. Several friends had remarked that once the wind started kicking up in the winter time we would lose our signal. One of my husband's co-workers informed him if we had trees in our yard that we'd also lose the signal that way. We were so worried about having a headache in our house that we almost changed our minds. Once you go to rabbit ears the kids pretty much stop squabbling over the TV because there's nothing on it according to them and life tends to become quiet and peaceful.

On the day the service technician from Dish Network came to install the satellite the first question we asked him was, how often would we be likely to lose the signal? Our nice and friendly technician put our fears to rest and assured us that under most normal circumstances, including some pretty big wind gusts, our signal would continue to reach our dish without very many interruptions. I am happy to announce that he was right. We have had a few outages but they are extremely rare and when they do happen the signal is picked right back up again while at the same time showing us a ticking counter of its activity.

One of the coolest things about having Dish Network satellite TV is that you gain the ability to pause shows, movies, commercials or whatever you happen to be watching. I must warn you though; this becomes a rather addicting behavior. Once you become accustomed to pausing your television you will find yourself trying to pause real life situations. Dish Network gives you the ability to pause up to two hours when watching normal TV but if you are watching a pre-recorded movie on the DVR, or digital video recorder, then you will have unlimited pausing control.

Recording shows to watch later are another addicting feature. When the technician installs your receiver box he will explain all of this to you. With Dish Network you are allowed to record 100 hours of broadcasting. Sounds like a lot doesn't it? Trust me when I say it's not. With a satellite dish that gets tons of channels it is very easy to use up those hours with shows that you plan to watch at another time. It's also great for recording in the middle of the night while you are sleeping.

As a parent the content that my children see on television concerns me. I feel a need to keep an eye on it and Dish Network allows me to do just that. The parental control features can be as complex or as simple as you wish. You have the option of blocking specific channels or just blocking rated content as well as blocking pay per view and adult listings that appear on the channel guide. I am able to select my own custom password that I create and every time something comes on TV that I don't approve of the Dish Network software throws a pop up window on the screen which will ask me for that password.

It's been a long time since I've had to rely on an antenna to watch TV and if I had my choice I think I'd stick with Dish Network. It's pretty reasonable in price and I rarely if ever have a problem with the service. It's well worth it to me for the parental controls alone but it's also nice to be able to watch a good movie without having to run to Blockbuster.